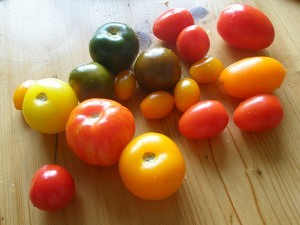 Knowing the differences in varieties of tomatoes and what they are best suited for, will help simplify the process of choosing which to grow. Before deciding on a variety though, you should determine whether you will be starting from seed, or purchasing starter plants (your choices may be limited depending on what your local garden centers have in stock).

Tomatoes may also be referred to by their growing season. A “fast ripening” plant will usually produce fruit within 4 months of being sown. A “main season” plant is expected to produce somewhere between 4 1/2 months to 5 months. “Late variety” plants will not begin to produce until after 5 months from the time they were sown.

Open pollinated tomatoes are true tomatoes, meaning the seed has been kept from one plant to the next without being tampered with or intentionally cross pollinated.

Heirloom tomatoes are cross-bred varieties that continue to be maintained (usually because the plant is considered especially good). Heirloom types have less disease resistance, but can be grown successfully in all but the very hot, humid areas that are notorious for tomato diseases.

A hybrid plant is created by taking pollen from one tomato variety and implanting it into another. This method creates a first generation plant (or F1). If you plan on harvesting and using seeds from your tomatoes for next year’s crop, you should avoid hybrid tomatoes, since the plants that do regrow will produce a weak and unpredictable yield.

(Commonly known as “large-fruited”). Beefsteak tomato plants produce big ‘beefy’ slices that can cover a full sandwich. The fruit from a beefsteak plant can easily weigh 2 pounds or more and usually ripens late in the season. The ‘Big Beef’ beefsteak tomato is a preferred choice of many gardeners, or you could try ‘Burpee’s Early Pick,’ which will produce much earlier in the season.

Some Beefsteak Varieties Include:

A cherry tomato plant produces “cherry-sized” fruit (approx.). These tomatoes range in size from dwarf, to larger than 7 feet tall. Most cherry tomato plants produce large quantities of fruit, so an average size family is more than supported by one plant. Sungold variety is one of the most highly preferred cherry tomato hybrids. If you are looking for an open pollinated variety, try Black Cherry.

Some Cherry Tomato Varieties Include:

(known also as the midget or patio tomato). This variety produces cherry type tomatoes (1″ diameter or less). These plants have a very short life cycle, quickly producing crops for a short period of time. Due to their compact vines and tight root structure, dwarf tomato plants can be grown in a hanging basket or small containers. Red Robin is a great choice for flavor, or you could try Small Fry if you are planning to grow in a hanging basket.

Some Dwarf Varieties Include:

Paste Tomatoes are less juicy than most varieties and offer a pear shaped fruit without a center core. Paste tomatoes have meaty insides and very few seeds, making them ideal for canning and sauces. Opalka is a universal favorite among paste tomato growers…

Some Paste & Drying Varieties Include:

Plum tomatoes usually have a fine thick flesh and less pulp than other varieties. This makes them great for holding shape when canned, and for slicing. They can also be easily cooked into a sauce. Red plum is the most popular plum variety.

Some Types of Plum Tomatoes Include:

The seed locule (or pulp) tends to fall out if these if they are sliced. Salad Tomatoes’ abundant seed pulp makes them a poor choice for sauces, but, their small size makes them ideal for cutting in half or in quarters to have with a salad. Try Burpees Longkeeper for a tomato that lasts late into the season and stores for a long time, or Cherokee Purple, for an incredibly sweet taste!

Some Types of Salad Tomatoes Include:

So Which Should You Choose?

Consider your climate (humid climates may require hardier types), preferred growing season, preferred use (for slicing, canning, sauces, etc.) and requirements for hardiness, before choosing a variety. You should also know in advance if you will be planting in a garden or a pot, (as there are only a few varieties that will do well in pots).

“Cinnamon is not just a great spice. Adding it to your diet boosts your organs, helping to ease stomach cramping and aid digestion. Cinnamon was considered a luxury historically, and was mentioned frequently in the Bible. Cinnamon also acts as an astringent (reducing discharge from wounds).”