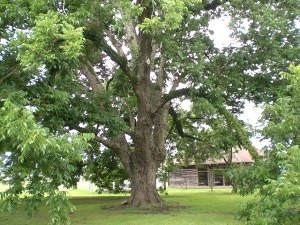 Brief History of the Pecan

Pecans are fully native to North America, and continue to be primarily produced in the U.S.A. Native American tribes in the South found and named the Pecan, using it to press oils, cook in stews and roast for long trips.

Because the Pecan Tree is native to the South, it grows best in areas with long, warm growing seasons. Pecans can be grown in zones 6 to 9, but, planting further North may serve to enhance many of the common growth and disease problems associated with Pecans. If planting in colder zones (such as zone 6) search for varieties specifically bred for these regions.

Most trees will start to produce pecans within five to eight years from planting (depending on variety, growth rate and location).

Pecan trees will produce both male and female blooms, but unfortunately, these usually come at separate times in the growing season. In order to properly pollinate, you will need to choose at least two (preferably three) varieties. You will want to plant at least one Type I variety that releases pollen early, and one Type II, that produces flowers first. Pecans will pollinate quite easily, and only need a warm day, with a good breeze!

The most common disease problem with Pecans is called Pecan Scab, and produces sooty black spots on the leaves and nuts. Elliott, Mohawk and Gloria Grande are three varieties with good disease resistance and are considered some of the better yard trees for home-growers.

Pecan trees grow very large, so you should allow a minimum of 35 feet of space between trees. Optimum spacing is usually about 50 feet. As trees grow larger, they may need to be thinned out to this distance. The trees prefer fertile, deep soil (avoid planting in shallow, sandy, and rocky areas if possible).

Some common pests known to invade Pecans include stinkbugs, and the pecan casebearer (leaves small worms in the nut). Most commercial growers will spray up to 15 times a year to prevent pests and disease. As a home-grower, spraying is not typically an option because pecan trees grow too large to spray conventionally. This is why finding disease resistant varieties is essential for someone choosing to grow Pecans at home.

Pecans are usually harvested from October through November (or sometimes as late as December). Though you can harvest nuts that have already fallen, this should be done with care, as they will lose quality quickly and are often already raided by squirrels before you get the chance to pick them up.

The optimum method of harvesting involves regularly shaking the branches to knock down small harvests of nuts. Since Pecan trees are so tall, you may need a large stick or other long tool to accomplish this. Because Pecan trees are “alternate bearing,” you will usually receive alternately small and large harvests from one year to the next. This is a normal growth habit for Pecans, and shouldn’t cause concern.

After harvesting, you should consider storing excess nuts in the freezer. Pecans have a safe shelf life of about a month, but frozen, will last for more than a year.

For more information on selecting trees, and Pecans, try some of the following links:

“One teaspoon of the blue-green algae Spirulina is equivalent to 3 to 4 servings of vegetables and 75% of your daily protein.”